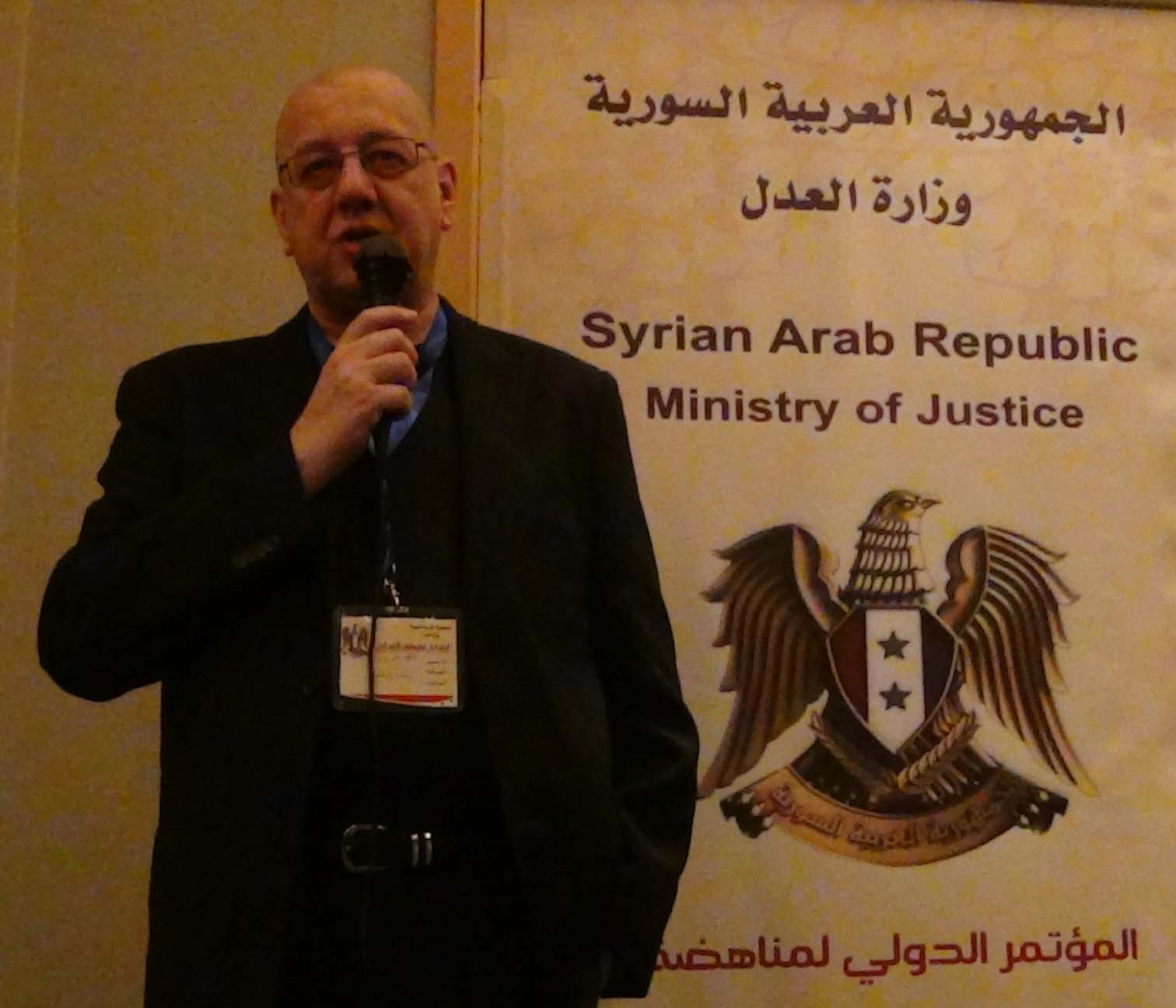 LUC MICHEL’S PAPER
(ADMINISTRATOR-GENERAL OF EODE) :
THE BELGIAN EXAMPLE. HOW THE BELGIAN INSTITUTIONS AND MEDIA LIE ON THE JIHADISTS!

The burning issue of the jihadists « coming from the EU » to participate in the terrorist attack in Syria (and also in Somalia) is an opportunity for more than a year of intense manipulation of the governments of the EU, members of the Atlantic Alliance and NATO media. Belgian government at the front, one of the most concerned, if not the most.
Belgian media talk of « dozens » of young Belgian-Flemish and « hundreds of Europeans ». Heavy underestimated!

Syrian security sources had given me during a mission in Syria in mid-June 2013 (with parliamentarians of the Flemish Parliament of Belgium) (2) all other figures: 7000-9000 ‘European’ jihadists, including 600 to 700 Belgians – the largest contingent with the Dutch -, including many converts of European origin. Added to this are girls – subject of shame for families and radical Islamists – gone to do « jihad by marriage » (a kind of activist prostitution actually).
The facts – losses on fronts, arrests, returns, various scandals – continually demonstrate that the Syrian figures are good and not the rigged statistics of the EU and the Belgians.

Added to this is the hidden part of the issue by NATO media:
- Officers of NATO Special Forces training the jihadists.
- Jihadist networks under control of the Turkish special services (NATO member).

All this explains the reluctance of EU governments …
The Belgian anti-terrorism federal prosecutor – whose spokesman says also to « understand » the motives of the jihadists (sic) – investigates on facts that the Belgian special services covered and organized, at a time when radical Islamists were NATO allies in Libya and Syria. What to expect when the spokesman of the Belgian Federal Prosecutor with competence in matters of terrorism, dares to state the following (16 April 2013): « the federal prosecutor stressed the importance of tackling the structures and groups that allow young Belgians to travel to Syria. However, he states that we must not chuck away all youth gone to Syria similarly, emphasizing that some seek to protect the civilian population (sic) and overthrow the regime and replace it with a democratic state (resic) .You said « duplicity »? Or rather « schizophrenia » ???

As for the jihadists who came back to Belgium, jumping on the anti-Assad propaganda of the Belgian authorities, all say today « not being jihadists, » « not have been fighting, » but « participating in humanitarian operations » (sic). In Damascus last June, I visited centers of anti-terrorist detention and met some of these jihadists from France, Spain and the Russian Caucasus. All told me the same humanitarian story. All had yet been arrested with arms in hand …

Yet the real face of the dirty war waged by the cronies and allies of the US and NATO in Syria, the pseudo FSA and the katibas and jihadist gangs who have integrated its ranks, among them the Al-Nusra Front (al-Qaida in Syria) is different. These are the crimes of terrorism and massacres of jihadism!
The West talks about « freedom fighters » gone « to help the civilians » (sic) and « build democracy » (sic). These are the media lies of journalists assigned to sell to the US and European public opinion the dirty war of NATO in Syria. The reality is quite different. Radically opposite!

The thesis of the Belgian authorities, notably the Ministry of the Interior, is to minimize the danger of young Belgians gone to participate in jihadist terrorism in Syria. They deliberately underestimate the number: « a hundred » they say, while they are 600 to 900 (the largest EU quota). On the other hand, they reduce the scope of their actions, citing as the Belgian anti-terrorist prosecutor « humanitarian grounds », or logistic support acts. Families, none apologized for Syrian victims of their terrorist offshoots, go in this direction.

How explain this understanding of the Belgian authorities. The Turks have stopped the investigations, left pass minor Belgian jihadists despite immediate alerts of the parents, worse, arrested Belgian mothers at their arrival in Istanbul. Collaboration where the « dialogue » between Ankara and Brussels is a sinister comedy. And because it is the Turkish secret services who organize the jihadist networks up to Syria. Including logistics infrastructure – weapons, hospitals, money, food – at the Syrian-Turkish borders. And the Islamists of Erdogan did it in agreement with some NATO services, including the French.

But the Belgian understanding is to be seeked elsewhere. EU-Christian Democracy, of which the Belgian Minister of the Interior in office until September 2014 is a member, is bound by a political alliance with the Conservatives of Erdogan. The Turkish leader is at home in Brussels or Berlin (Merkel’s CDU-CSU), holding there even meetings and training there the Turkish immigrant communities.
Who knows that Erdogan’s AKP is an associate member of the ‘European People’s Party’, the EPP which includes EU-Christian Democracy?

The Belgian-Flemish jihadists issue tragically illustrates the inconsistent policy of NATO towards radical Islamists … Denounced in Brussels or Paris. Fought in Afghanistan. But funded and armed as allies and NATO colonial infantry in Libya, Syria, Mali, or in the Caucasus against Russia. All this is already paid for in Afghanistan and Mali with the blood of young Europeans, delivered to the Yankee Moloch to lead a neo-colonial war, which is primarily a war against Greater Europe!

The trigger for the terrorist jihadist activism in the Sahel and Maghreb as in sub-Saharan Africa or Europe is indeed the answer to a strong signal, and extremely irresponsible, given over three years by the US and NATO : the collaboration of NATO special services, and particularly the CIA, the French and the British, with the leaders of al-Qaeda and AQIM, its north African branch, in Libya, Syria and Algeria.

We will never repeat it too much, the vision, emblematic example, of a former Guantanamo prisoner, Abdelhakim Belhadj, dubbed by the NATO generals, French at the front, as « military governor of Tripoli » in August 2011 is a bad signal given to all jihadists. The same Abdelhakim Belhadj was then assigned for a mission against Damascus in November 2011, at the head of a brigade in Syria, based in Turkey, whose training camps were organized specifically in Libya with the blessing of the NTC and its protectors of NATO.

Then without forgetting the Central African Republic, Mali, Niger and Cameroon, where Westerners, apparently not stung by the Libyan and Malian disasters have replayed the cursed scenario, the devil’s scenario. Behind this devil’s scenario, there is the American geopolitical project, that of the Bush neocons reactivated by Obama, said the « Greater Middle East ». Within the meaning of increasingly larger and where Africa has become the backyard of this reshaped « Greater Middle East » and its strategic target, the control of Eurasia, key to an « American twenty-first century. » In this project the tactic is simple, always the same: to combine in a weak or fragmented state a military power and Islamist forces, both into liberal economics (the first characteristic of the Muslim Brotherhood, for example, is their absolute hostility to Socialism). To achieve this, it is obviously necessary to be allied, temporarily or permanently, with the jihadist devil!

(1) International Conference on Terrorism and Religious Extremism under the auspices of the Syrian Minister of Justice Dr . Najim Hamad Al- Ahmed as from 29th Nov. to 2nd Dec 2014, at the DamaRose Hotel, Damascus.
Luc MICHEL, Administrator-General of EODE, attended this conference, with a team of EODE-TV.
For the media part covered by EODE-TV, a duplex from Damascus will be provided for « Le Débat panafricain” (The Panafrican Debate), the Sunday flagship program of AFRIQUE MEDIA TV on 30 November. In addition, two programs « GRAND REPORTER » will be co-produced by EODE-TV, Africa Media and Luc MICHEL.