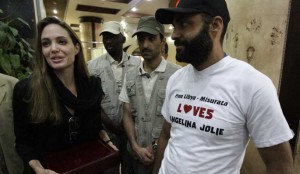 the sad example of Angelina Jolie …

Focus: The fact of the day decrypted by Luc MICHEL

« The violence has also forced tens of thousands of people to flee. According to the High Commission of the United Nations for Refugees (UNHCR), the number of Syrian refugees exceeded 250,000 people, including 85,197 in Jordan, where were Tuesday UNHCR chief Antonio Guterres and his special envoy, Angelina Jolie. Upon her arrival in the night, the American actress, accompanied by Jordanian soldiers, met with newly arrived families to the Jordanian border. ‘

Yesterday 16 september the “UNO-NATO-Hollywood tour” was in Iraq …

Hollywood – Film Division of the Propagandastaffel of the Pentagon – goes to war once again … The imperialism with humanitarian grounds made in NATO must be sold to the masses of the imperialist metropolises. It is the role of humanitarian propaganda made in Hollywood.

And Angelina Jolie crawls to the rats of the NTC-FSA, their NATO masters and their accomplices in the UN! After crawling to that of the NTC in Libya.

A VISIT ORGANIZED TO SERVE THE PROPAGANDA OF NATO

« The violence since March 2011 have pushed tens of thousands of people to flee the country, » says AFP. The violence of an armed coup by NATO, supported by al-Qaeda jihadists and mass terrorism of Islamist groups, forgets to mention the AFP.

Psychological reservation in the media war against Damascus, Jolie visited on 11 September a refugee camp in Jordan. Note that the information on this visit is carefully mixed with news in brief on « violence and massacres » of the Syrian Army, various news from the FSA and echoes of the « Battle of Aleppo. »

Thus, lighting example, LE POINT (Paris, 11 September) shows a photograph of the actress in Jordan in an article entitled « New bombing in Aleppo, in the heart of the battle in Syria »:http://www.lepoint.fr/monde/nouveaux-bombardements-a-alep-au-coeur-de-la-bataille-en-syrie-11-09-2012-1504935_24.php

We must go to the end of the article of LE POINT to hear about Jolie. And her visit is explained through rigged quotes and statistics of the so-called « Syrian Observatory for Human Rights » (sic), the SOHR, created by MI5 and MI6 in London, around an isolated Islamist militant. This ghost network, with no contacts in Syria, which rigged « info » comes directly from Thames House (the seat of the British service MI5) has become the main source of Western agencies and media of NATO.

« We urge the international community – note the language of NATO – to do everything in its power to help these refugees, » said the actress in Camp Zaatari, stressing that « there is much to do « .

Angelina Jolie has been named Special Envoy of the United Nations High Commissioner for Refugees (UNHCR) in April, with diplomatic status (sic).

Located at the Syrian border, camp Zaatari, one of the largest in Jordan, is known for its very difficult living conditions. It is there particularly that the French army installed an emergency hospital last August. Which was also denounced by Damascus as a base for the French secret service.

It will be recalled that the actress diplomat – as told ELLE – was also very involved in the anti-Serbian propaganda in Bosnia.

The scenario she plays in Syria against the government of President Assad, Jolie already played it in 2011 against Gaddafi’s Libya. When NATO developed its major campaign of media lies about « civilians to protect » (resic). « Angelina Jolie was shouting relentlessly her support to the Libyan people, which was going through a period of profound unrest and extreme violence. Worried about the future of the Libyan people (sic), the actress made her voice heard to make the plight of refugees an issue of international order, « wrote NEWS OF STARS (not invented, Paris, 4 April 2011) .

« Given the violence suffered by the Libyan people for several weeks (resic), the actress has decided to take things in hand, added the French website. Given the urgency of the situation – tens of thousands of refugees at risk – Angelina Jolie today launches an international appeal to help them.  » « With regard to Libya but also Côte d’Ivoire – the other big NATO operation at that time – which also is undergoing profound changes. »

JOLIE AND THE SO-CALLED « ARAB SPRING » HER MASTER’S VOICE!

When it comes to talking about the so-called « Arab Spring, » Jolie, well trained, real media bitch of NATO and the PENTAGON, it is the Her Master’s Voice! Speech and language elements formatted, you can almost hear BHL or Fabius …

In October 2011, while Libya was handed over by NATO to the NTC and Islamic gangs – one of whose leaders, from al-Qaeda in Guantanamo Bay then in the service of NATO, or vice versa, Belhadj Habdelhakim was appointed « Military Governor of Tripoli » by the French generals of NATO – Jolie told the TELEGRAPH (London, 11 October 2011):

« I came to Libya for several reasons, to see a country in transition at every level, and assist in the efforts of the full accomplishment of the promise that carries the » Arab Spring «  » (…) The country has before it several challenges, including internally displaced persons, refugees, the rule of law, health system, health and other humanitarian needs, « she added. Forgetting to say that it is the NATO coup of 15 February 2011 that precipitated the civil war and foreign intervention, destroying a Jamahiriya that had the highest level of life and development of whole Africa. According to the UN the actress claims to serve.

Asked by journalists « in the lobby of a hotel in Tripoli, » says the TELEGRAPH, she « praised the extraordinary contribution of ordinary Libyans, whether in the rebel army or in the National Transitional Council (NTC), in order to change their Nation (…) What is extraordinary is that a lot of people (…) had retired, or were running restaurants or selling baby clothes (sic) before they engage in the revolutionary ranks (resic) (…) They all quit their jobs to work here, for the sake of their country.  » Here she is in the service of other « revolutionary » made in NATO-Alqaida, destroying Syria.

Realizing her film « In the Land of Blood and Honey, » the American actress had in fact already chosen a controversial topic, based on a fundamental conflict between Serbs and Bosnians between 1992 and 1995. Film that slavishly follows the indictment of the pseudo ICTY against Serbian general Madlic. Whose caricature variation is the main hero. We should think it’s BHL in his filthy movie « Bosna ».

Islamist Bosnians, supported at the time by the U.S., NATO, but also the Saudis and IRAN. Their president Izetbegovic, author of an « Islamic Declaration » in 1973, intending to create an « Islamic Republic » in Bosnia. The heart of his militia being an « Islamic Legion » that became the 107th Brigade, with Arab badges, trained by both the Iranian Pasdaran and the American generals of the MPRI, Blackwater’s ancestor.

Even the very anti-Serbian daily LE FIGARO (Paris, 21 February 2012) was critical of the bias caricature of the film, which does not say a word about militant Islamism of Izetbegovic’s regime and disguises the story: « Who experienced the war in Bosnia may regret some Manichaeism. With each passing day, the attacked like a little more the aggressor, mountain hotels requisitioned by the Serbian leadership in Pale, on the heights of Sarajevo, had less luster than the old palace filmed by Angelina Jolie, the passivity of the Western powers led a progressive support of the Islamist circles for the Bosnian resistance, largely ignored here. ‘

People further note that the film was even denounced by the Minister of Culture of Bosnia, although a member of a government under direct control of the UN and NATO (which may remove deputies, ministers, governments, and prohibit political parties, as Seselj’s Serbian Radical Party). The Minister of Culture – who banned Jolie filming in Bosnia, the film has been done elsewhere – explained: « We can not prevent the film was shot elsewhere, but we can at least express our disapproval of the shooting of a film that does not tell the truth and hurts a large number of victims.  »

Jolie has also participated in anti-Russian campaigns in Chechnya. In 2003 – she is then 28 years old – Angelina goes to the meeting of Chechen IDPs in Ingushetia Bella camp. She then « came to a decision in a precise manner on the possible deportation of Chechen refugees » (sic).

Jolie with NTC Bearded in Misrata in October 2011.

For the Libyan women it’s the burqa in one of the strongholds of the most radical Islamists in occupied Libya (photo: « vote » for the Municipality council of Misrata in March 2012 … You have not heard of it, normal, even the NATO officers were scared).

Jolie made in NATO in the service of the Pentagon’s propaganda in the shadow of the UN. 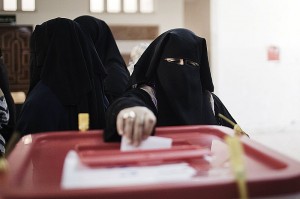 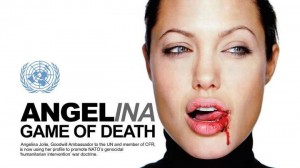