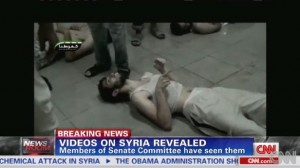 The participants in the UN Human Rights Council session warned of the consequences of a military strike against Syria, noting that such an attack would constitute a crude violation of international law. »

Russia says the United Nations Human Rights Council (HRC) has confirmed that the videos and photos purporting to show the victims of a chemical attack near the Syrian capital, Damascus, were fabricated.

The Russian Foreign Ministry said in a Tuesday statement that” international experts as well as Syrian public and religious leaders presented their evidence to the 24th session of the UN Human Rights Council in Geneva on September 9”.  It also said “evidence provided by numerous witnesses confirms that militants fighting against the Syrian government used chemical weapons in the Damascus suburb of western Ghouta last month”.

The US administration has been using the footage and the photos in question to lobby for a military strike on Syria.  The recent war rhetoric against Syria first gained momentum on August 21, when the militants operating inside the Middle Eastern country and the country’s foreign-backed opposition claimed that “over a thousand people had been killed in a government chemical attack on the outskirts of Damascus”.

The Syrian government categorically rejected the accusation. Nevertheless, a number of Western countries, with the US being at the forefront, quickly started campaigning for war.

This entry was posted in # ACTU / BREAKING NEWS, * English. Bookmark the permalink.