# LUCMICHEL. NET / HOW THE BELGIAN INSTITUTIONS AND THE MEDIAS LIE ON JIHADISTS ! 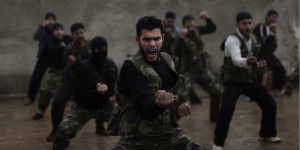 The burning issue of jihadists “from the EU » participating in the terrorist attack in Syria (as well as in Somalia ) is an opportunity for months of intense manipulation of EU governments , members of the Atlantic Alliance and the NATO media . Belgian Government ahead, one of the most concerned, if not the most . The return from Syria of a young Flemish jihadist , a radicalized convert Jejoen Bontinck is an opportunity for new media lies …

Syrian security sources gave me during a mission in Syria in mid-June 2013 ( with parliamentarians from Belgium Flemish Parliament ) other figures : 7000-9000 ‘European’ jihadists, including 600 to 700 Belgians – the largest contingent with the Dutch – including many European converts.

Added to this are the girls – a shame for families and radical Islamists – gone to do « jihad by the marriage » (a kind of activist prostitution actually).

The facts – losses fronts, arrests , returns, various scandals – constantly demonstrate that the Syrian figures are the good ones and not the faked statistics of the EU and the Belgians.

Added to this is the hidden component of the file by NATO media:

- Officers of the Special Forces of NATO training the jihadists ( at least until July , the Turks – that Washington has just scolded about it – still continuing the supervision ) . Belgian, French , Dutch, Turkish officers , were arrested in early June in Qusseir …

All this explains the reluctance of the EU governments …

The Belgian anti- terrorist federal prosecutor – whose spokesman said also to « understand » the motivations of the jihadists (sic) – investigates on the facts that the Belgian special services covered and organized at a time when radical Islamists were NATO allies in Libya and Syria. You said « duplicity » ? Or rather « schizophrenia » ? ?

As Jejoen Bontinck is concerned,  jumping on the anti-Assad propaganda of the Belgian authorities , he now says  » not being a jihadist , » « not have been fighting”, but  » have participated in humanitarian operations  » (sic) . In Damascus , last June , I visited anti- terrorist detention centers and met some of these jihadists from France , Spain and the Russian Caucasus. They all told me the same humanitarian story . All had yet been arrested with weapons in hand …

9 Responses to # LUCMICHEL. NET / HOW THE BELGIAN INSTITUTIONS AND THE MEDIAS LIE ON JIHADISTS !