# LUCMICHEL. NET / WHAT ARE THE CONDITIONS OF A VICTORY IN SYRIA ? 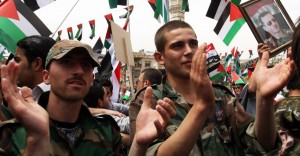 Straight talk as usual. I do not have the habit of wafflin. And as Zinoviev (read ‘The Yellow House ‘) , I think that speaking directly and sometimes brutally is the prerogative of an innovative and confident thinking. By victory in Syria, I mean the victory of President Assad and a political system based on a renovated Ba’ath (which has self-cleaned and remains the largest Syrian political force supporting the ideology of pluralist and multi-confessional Syria), open to new forces of Syrian society. With our ‘Syria Committees’, we defend Ba’athist Syria. Any other outcome, including a bastardized system with elements of the pro-Western opposition, will not be a victory. And no matter then a victory over the Islamists.

In Damascus, they obviously think like us. « Syria announces its participation ( Geneva -2) with an official delegation provided with directives of President Bashar al- Assad , » announced Wednesday a source at the Ministry of Foreign Affairs, quoted by the official SANA news agency. The ministry said that « the Syrian official delegation goes to Geneva not to hand over power but to dialogue with those who (…) support a political solution for the future of Syria. »

Syrian Deputy Foreign Minister Faisal Moqdad also stated the same day that Damascus was « not isolated » diplomatically. In this war, organized and imported by the West and its Islamic allies (Turkey, Qatar, Saudi Arabia and the Muslim Brotherhood ), with more than 120,000 dead (including more than 40,000 soldiers, police and loyal militiamen, we forget !) and that forced thousands of Syrians to flee their homes, the Syrian Government, legal and legitimate, is mainly supported by Russia – but also by CSTO, the Group of Shanghai and China (very discreetly) – and Iran, various BRIC , Eastern European and Latin American allies of Moscow … What makes people. And reduces the famous ‘International Community’ so much advanced by NATO media to the U.S. and their NATO and Islamic vassals. While the pseudo opposition is supported by the majority of Western countries and some Arab countries, including from the Gulf, allied to the West. Not to mention discreet but firm support of Israel and U.S. and French Zionist lobbies …

The key to victory in Syria is not diplomatic. ‘Geneva II’ is a great diplomatic show, full of ulterior motives, manipulations, calculations and miscalculations, theater, double languages ​​(plural). The key is military (*). It was also understood in Damascus and Moscow. An expert from Syria, Nikolaos Van Dam ( author of « The struggle for power in Syria »), explained today to the AFP that « the regime is more likely to win (in Geneva) if it remains militarily the strongest. » « Bashar al- Assad wants to negotiate only if he benefits, such as stopping the war, but he certainly will not negotiate his departure, I do not see him signing his own death warrant . »

At the head of the State since the death of his father in 2000, Bashar al- Assad may run under the new Constitution (passed by the Syrians by Referendum on 26 February 2012) , for two further terms. The presidential election is scheduled for next June. And Assad is a candidate. The conditions for victory is Assad winner of the 2014 Syrian Presidential election. And nothing else!

(*) On the ground, the military operations take place near Nabek and Deir Attiya in Qalamoun and eastern Ghouta , said a security source , ensuring that  » the rebels had failed to break the siege imposed by the army. » The aim of current operations is threefold: 1/ Clean and take back completely Aleppo , 2/ clean completely the east of Damascus , 3/ ensure control of the northeast border with Jordan ( which replaced Turkey as a base of the FSA and jihadis). On these three fronts, the Syrian Arab Army is in a strong positio , towards a complete victory.

8 Responses to # LUCMICHEL. NET / WHAT ARE THE CONDITIONS OF A VICTORY IN SYRIA ?