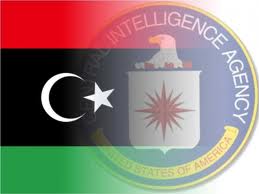 The coalition leaders, recognized by dozens of countries – all U.S. allies or NATO members – as « the sole legitimate representative of the Syrian people » (resic) have held a meeting on Monday in Istanbul, Turkey.

« The meeting began on a positive note, » said AFP without shame, « with the announcement by the Free Syrian Army (FSA) for its support to an interim government. »

« We will support this government and work under its leadership, » said at a press conference Selim Idriss, Chief of Staff of the FSA, which is the main military force of the rebellion. The rebel leader also guaranteed without laughing that the FSA was able to control the weapons they were given, while France said it was ready to arm the rebels with Britain, even in the absence of consensus within the European Union. « We hope that the European countries will make the decision to give us arms and ammunition (…) We give them all the guarantees that these weapons will not fall into the wrong hands or in those of extremists, » he said.

In reality, the jihadist groups like Al-Nosra – al-Qaeda in Syria – hold the upper hand …

With this support, the 73 representatives of the Coalition must first choose the form of the executive they intend to place, between an interim government with broad political powers or an executive body with powers more limited, allowing the opposition to occupy the seat of Syria at the next summit of the Arab League, fallen into the hands of Qatar and Saudi, at the end of March. They « then reached a decision on the name of the Prime Minister » (sic).

But who is this puppet « Prime Minister » imposed by Washington?

The National Coalition of the Syrian opposition has « elected » (sic) on Monday night in Istanbul Ghassan Hitto, an executive of high tech companies « who had long lived in the United States », puppet « interim prime minister » of Syrian territories at the hands of the jihadist rebellion. « Ghassan Hitto won with 35 votes to 49, » announced Hicham Marwa, a member of the Coalition, after the counting of ballots.

AFP tells us that « Until last year, he was a senior manager in a telecommunications company in Texas (USA) and was also invested in the life of the local community. He spent 25 years of his life to the field of telecommunications, including 16 positions of responsibility. But in November 2012, when the rebellion is growing against the regime in Syria, he quit his job to « join the ranks of the revolution. » He was already involved in relief, by setting up in 2011 the Shaam Relief Foundation to raise funds and organizing events in Texas to help children in Syria. After leaving office, he joined the Syrian National Coalition.  » He became « branch manager responsible for humanitarian assistance, based in Turkey – which is also that of the shipments of illegal arms to Syria jihadists – and had urged the international community to do more to help people displaced by the conflict.  »

Ghassan Hitto was born in Damascus in 1964, but « he spent much of his life in the United States, earning a degree in mathematics and computer science in 1989 from Purdue University in Indiana and a master in 1994 « . Let us speak bluntly: this is a U.S. citizen with a U.S. passport. And probably as his counterparts installed in power in Libya, a CIA agent!

It had also a second candidate, also a U.S. citizen. The latter, Osama al-Kadi, « economist », « was born in 1968 in Aleppo and heads in Washington the Syrian Centre for Political and Strategic Studies »; an agency  linked to the Pentagon and the CIA.

In Libya also, U.S. citizens, traitors to their homeland and CIA agents are in charge.

The chairman of the puppet « Libyan National Assembly » installed by the U.S. and NATO is indeed a Libyan traitor naturalized American and CIA employee since the early 80s. Megaryef as his accomplice Khalifa Hifter « the Libyan General » in the service of the CIA for three decades and in charge of the reorganization of the new Libyan colonial army at the service of NATO, is a typical example of this clique of traitors who organized the colonization of Libya.

President of the  » Libyan National General Congress » (the name was chosen to usurp that of « General People’s Congress », the highest institution of the Libyan Direct Democracy under Gaddafi), the new puppet National Assembly stemming from the rigged parliamentary elections of 7 July 2012 (*), Mohamed al-Megaryef is both a U.S. citizen for over 30 years and an economist, known to be close to Islamists. This is not a coincidence, since the Libyan Islamists were exploited from 1980 by the CIA against the revolutionary regime of Gaddafi. Megaryef is also currently leading the Libyan National Front, a neoconservative very right-wing movement.

Born in 1940 in Benghazi, cradle of the Libyan uprising, Mohamed al-Megaryef is the former Libyan ambassador to India. This « great figure of the opposition to Gaddafi, » according to NATO media reports has chosen to exile in the 80s. He then led the « National Front for salvation of Libya » – armed splinter group, mentored and financed by the CIA, a political movement abroad mandated by the U.S. to group the opponents in exile, which his current movement comes from – which tried repeatedly by coups and terrorist campaigns to end the regime of the Libyan leader.

Behind these coups since 25 years, another US-Libyan, also an employee of the CIA. Megaryef’s old accomplice and with him the real boss of post NTC Libya: Khalifa Hifter (also written Haftar or Hafter).He also followed a route of a traitor at the service of the enemies of his country.

By March 2011, the newspaper McCaltchy revealed that Khalifa Hifter, a former colonel deserter from the army of Gaddafi, « had been sent to lead the Libyan rebels » supported by the UN, the United States and the coalition. Hifter lived for twenty years « in the suburbs of Virginia » (where is installed the CIA in Langley), « where he is established, but the former officer of Gaddafi maintained links with groups remained in the country » Chris Adams the author of the article wrote. An acquaintance of Khalifa told Adams that « no one knew what really Hifter did to feed his large family »

14 years later, Hifter reappeared in Benghazi, in March 2011, appointed « general » and commander of the NTC militia. To the great anger of General Younes, Libyan Army deserter since only a few days, who already saw himself as general in chief of the Benghazi rebels. I bet that the wild execution in late July 2011 of Younes by jihadists of the same NTC close to its leader Mustapha Abdeljalil (**) did not hurt much Hifter …

Pierre Péan’s book MANIPULATIONS AFRICAINES makes Hifter an employee of the CIA from 1987, « Haftar, then Colonel of Gaddafi’s Army, was captured in Chad where he fought with a rebellion backed by Libya against the government of Hissène Habré, backed by the United States. He defected to the Libyan Salvation National Front (LSNF), the main opposition to Gaddafi, which had the support of the CIA.  » Megaryef armed small group for reminder, the Libyan traitors world is very small. « He organized his own militia, which operated in Chad until Hissène Habré’s downfall in 1990 by Idriss Déby, his rival supported by France. » According Péan, « Haftar force, created and financed by the CIA in Chad, vanished into the wild with the help of the CIA shortly after the overthrow of the government by Idriss Déby. » What else?

These are the lackeys of the USA, American citizens and CIA agents who run the Libyan rump state or intend to seize Syria …

(*) Luc MICHEL, WHERE IS LIBYA GOING TO? FROM THE COMEDY OF THE PSEUDO DEMOCRACY TO SOMALIAZATION … 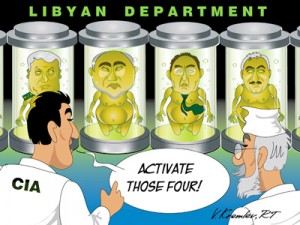 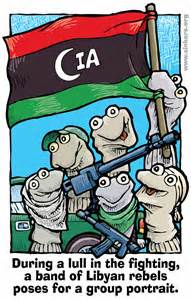