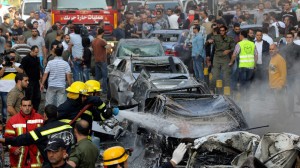 Two blasts near the Iranian embassy in Beirut killed at least 23 people, injuring 146 and causing havoc and a massive fire in the Lebanese capital. Six buildings were reportedly destroyed in the embassy compound.

The harrowing scene was primarily caused by 100lb (50kg) of explosives loaded into a car, according to AP. Security sources on the ground said there were two blasts – the first caused by a person on a motorbike carrying some 4.4lbs (2kg) of explosive, while the second was by a suicide bomber who tried to ram the compound with the car.

In June, the same location was targeted, when a car bomb blast injured 53 people…

“ISRAELI AND SAUDI INTELLIGENCE ARE BEHIND THE EXPLOSIONS”

However, there are conflicting reports as to how the initial blast unfolded. Eyewitnesses claimed that a man was mounted on a motorbike, while a Lebanese official told Reuters that the man wearing an explosives belt was seen rushing towards the embassy’s outer wall before blowing himself up. Witnesses at the scene reported that the explosions occurred within one or two minutes of each other. Injured people and destroyed buildings were seen on very disturbing pictures circulated by Lebanese media in the immediate aftermath.

Witnesses speaking to Al Arabiya reported seeing smoke rising from the battered embassy compound, while footage from the bloody scene showed raging fires, with the death toll rising by the minute. It is not clear who was behind the attack at this time, but the area where the blasts occurred is significant in two ways:  it is considered to be a stronghold for the Lebanese Shiite faction, Hezbollah. And secondly, it is a popular area and a home to many families of Iranian diplomats working in Lebanon.

The Iranian ambassador to Lebanon reacted promptly to the situation, saying that it was beyond any doubt that the embassy was the target of the attack and placing blame on a « Zionist entity. » He added that such attacks only « keep us strong and proves the righteousness of our stances. »  Minutes before it was reported that the Iranian cultural adviser for Lebanon was wounded in the blast, but shortly thereafter succumbed to his injuries.

Later in the day Al-Manar found out that the Yemeni ambassador was lightly injured in the blasts.

Iran’s foreign ministry subsequently added that the blast was the work of Israeli mercenaries. Syrian information minister Omran Zoabi to Al-Manar has come out with a similar opinion, saying that Israeli and Saudi intelligence are behind the explosions. Later in the afternoon Reuters reported that Al-Qaeda-linked Abdullah Azzam brigades have claimed responsibility for the double suicide bombing.

Lebanon and Iran enjoy close relations, both having a large Shiite population. This is not the first attack that has occurred in the area. Hezbollah compounds have come under frequent fire before, especially as Sunni-on-Shia tensions have begun to mirror each other across the Middle East.

While an ally of Iran, Hezbollah is also a strong supporter of neighboring Syria’s President Bashar Assad, who is currently fighting his own terrorist threat.

Political bombings in Lebanon are a frequent occurrence. One of the more severe recent ones took place in late August, when 42 people lost their lives, while literally hundreds were injured in twin explosions in the city of Tripoli. Similarly, a blast near Hezbollah’s headquarters just days before, on August 15, killed 27 people, injuring 150. 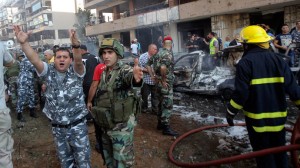 14 Responses to # PCN-TV/ SYRIA-LEBANON : JIHADIST TERRORIST ATTACK IN BEIRUT. “ISRAELI AND SAUDI INTELLIGENCE BEHIND THE EXPLOSIONS”?