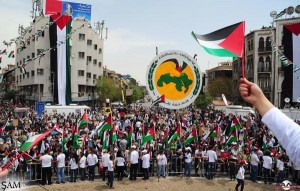 Syria Committees with PCN-NCP-SPO and AFP

Thousands of people gathered Saturday on a large square in Damascus to mark the 65th anniversary of the founding of the Arab Socialist Ba’ath Party, in power in Syria.

In a festive atmosphere to the rhythm of patriotic songs broadcast over loudspeakers, supporters of Syrian President Bashar al-Assad waved flags in the red, black, green and white colors of Ba’athist Syria and the Ba’ath and portraits of the head of State.

Photo: in background, The Ba’ath yellow and green pan-Arab logo

9 Responses to # SYRIA COMMITTEES / 65th ANNIVERSARY OF THE BA’ATH: DEMONSTRATION OF THE BA’ATH PARTY IN DAMASCUS!