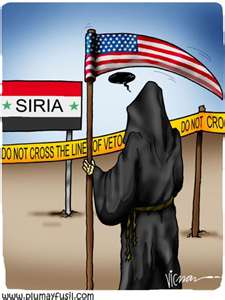 Towards a « Kosovo bis » scenario against Ba’athist Syria…

LE TEMPS (Geneva) is a media of NATO among the most advanced against Ba’athist Syria. With LIBERATION (Paris) which the Swiss daily often takes information (*). Every day is a stream of media lies to justify NATO intervention in Syria.

This, as Clinton already announced would be out of a Security Council mandate. LE TEMPS, in its edition of Monday morning, runs as a headline « An intervention is no longer taboo. »

The presstitutes state that « Given the risks of a lengthy civil war and a system ready for anything (sic), the assumption of air strikes is increasing. The precedent of Kosovo is mentioned.  » Ie the direct aggression of NATO against the third Yugoslavia of President Milosevic in 1999. Which saw NATO bombing a European city for the first time since 1945, Belgrade, sowing death and destruction there.

All illustrated on the site of LE TEMPS by a picture of a terrorist bombing on Tripoli, Libya, in 2011. What a program!

The columnist of LE TEMPS made, for his part, his paper on « Intervening in Syria, the ultimate option. »

Ultimate option against the double failure of NATO in Syria.

Diplomatic failure at the UN (where Russia and China, supported by the Shanghai Group and the Latin American ALBA put the U.S. projects. in failure).

Military failure in Syria itself, where, despite the overwhelming support of NATO (including the commitment of special forces) and the terrorist attacks, the Syrian Army and the Ba’ath militia cleanse city after city of the gangs of terrorists of the pseudo FSA (made in NATO) and of jihadi groups from Libya and the Caucasus.

Choosing a Swiss media to launch this new stage of the NATO media war is part of the malice of the NATO propaganda in Europe, because it takes place in the media myth of the ‘international community’ assimilated to NATO and the USA.

Switzerland is actually involved in assaults by NATO, among others in Afghanistan. Its pseudo « neutrality » has become a farce.

As for the international community, it is not confined to the U.S. and its colonies of NATO. Even if the Atlanticist West is dominant in the UN and uses it as an instrument of imperialist domination. The Russian-Chinese position is supported by the powerful military-political alliance of the « Shanghai Group », which includes Russia, China and four former Soviet republics, Kazakhstan, Uzbekistan, Tajikistan and Kyrgyzstan . And by the Latin American ALBA – the Bolivarian Alliance for the Peoples of Our America, which includes Bolivia, Cuba, Ecuador, Nicaragua and Venezuela – and several countries of BRICS.

Media preparation – as there are artillery preparations – aiming to direct aggression of NATO in Syria … The media war, amplification of psychological warfare in the era of mass media and Web 2.0, is today one of the weapons – such as artillery, missiles, naval or air forces – of the American-Zionist imperialism and its military arm of NATO.

This entry was posted in * English, * Press Reviews. Bookmark the permalink.