# SYRIA COMMITTEES / CHEMICAL WEAPONS IN SYRIA: AN ANTI-ASSAD PROVOCATION OF THE FSA MADE IN NATO! 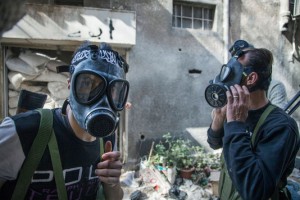 official representative of the Russian Ministry of Foreign Affairs

While the Commission of Inquiry of the UN has arrived in Syria, with the agreement of Damascus, to investigate the use of sarin gas on three sites (where the FSA is in accusation) A huge provocation is organized by the jihadists and their Saudi mentors against Damascus. And now the major PropagandaStaffel of NATO, these media to orders, rage against Bashar al-Assad.

The EU, the Arab League, the warmongers of  NATO, as French Minister Fabius or Belgian Minister Reynders have immediately made their this false information and mobilized all their resources to relay the intox.

The evidence given by Assad opponents is almost a fantasy. On jihadist websites – where the pseudo-OSDH of London, Amnesty or AFP resumed the info – the allusion is made to « Alawite officers » (sic) to whom « Assad would have paid tribute  » These supposed « texts and photos » are taken from hacked or non existing sites and are used by the opponents as « evidence » of the guily of Syrian soldiers. Is it not childish to take « rigged »  pictures and texts for cash and refer to it to prove such a serious charge?

But what do we really know of this matter? What do say the knowledgeable Damascus and Moscow sources?? Which say the opposite of Washington, NATO and the Western media to orders …

RUSSIA DENOUNCES A PROVOCATION AND REFERS TO « A MISSILE » OF THE FSA!

Another position in Moscow than in Washington or Brussels! Russia estimated Wednesday that the suspected use by the Syrian authorities of chemical weapons in the outskirts of Damascus was « a pre-planned provocation. » « All this makes us think that we have to do again with a pre-planned provocation, » said the Russian Foreign Ministry in a statement.

The Russian Foreign Ministry directly evokes « a chemical weapon used by the rebels against Damascus. » According to Alexander Lukashevich, official representative of the Russian Ministry of Foreign Affairs, « a missile containing a toxic chemical has been deployed by rebels in the outskirts of Damascus. »

« All this looks like a serious attempt to create an excuse at all costs to force the Security Council of the UN to take the party of the opposition. That would ruin the chances of calling the Geneva conference while a meeting between U.S. and Russian experts is expected to prepare it, « believes Alexander Lukashevich.

Lukashevich also said: « What attracts attention is that the biased media immediately began to conduct a media offensive by endorsing the government side full responsibility. » He further stated that « this provocative act was developed before, » citing « the simultaneity between the alleged use of chemical weapons near Damascus and the onset of action of the mission of UN experts to investigate the possible use of these weapons.  »

DAMASCUS DENOUNCES THE PROVOCATION AND THE MEDIA WAR AGAINST SYRIA

Syrian authorities deny in block. « The information on the use of chemical weapons in the Ghouta (Rif of Damascus) is completely false, » according to the official news agency Sana which reproduces the statements of the Minister of Information, accusing satellite channels including Al- Jazeera and Al-Arabiya « involved in the shedding of Syrian blood and supporting terrorism » to disseminate « unfounded » information. « This is an attempt to prevent the UN commission of inquiry on Chemical Weapons to carry out its mission, » the agency said.

The general Command of the Army and the Syrian Armed Forces said that « the allegations of certain channels involved in the shedding of Syrian blood on the use by the Syrian Arab Army of chemical weapons in areas in the outskirts of Damascus are completely baseless.  » A statement issued by the Army Command said that these « allegations come in the context of the media war launched by some countries against Syria. »

The statement noted that « the claims of terrorist groups and the channels that support them about the use by the Syrian army of chemical weapons constitute a desperate attempt to cover up their losses on the ground and reflect the hysteria of these groups and those who support them « . « The army will continue fulfilling its national mission in protecting the homeland and the citizens, and in combating terrorism anywhere on Syrian territory, » says the statement.

And the statement concluded: « The Army is committed to fulfill its constitutional duty to rid the country of terrorist groups, and calls upon people who bear arms to turn themselves into the relevant departments to regularize their situation. »

SARIN GAS, WHAT IS IT?

Developed in Germany in 1939 by researchers working on pesticides, used for an attack in the Tokyo subway in 1995 by the Aum sect, Sarin gas, toxic to the nervous system in which the transmissions are found blocked, can be absorbed by inhalation though a simple skin contact is sufficient to contaminate. Liquid form (formula C4H10FO2P), it is soluble in water, and need to be exposed to a high temperature to turn into steam. Colorless and painless, it causes death by suffocation and heart failure in less than ten minutes. The main symptoms are nausea, cough, diarrhea, breathing difficulty, vomiting and convulsions.

There are antidotes, but they are only effective if they are taken very quickly after exposure. Anyway, its viability in the air extends only a few minutes, a few hours at most, depending on climatic conditions.

So Sarin gas kills massively over a large area. And no escape. Presenting « victims » of this gas who survived, whose eyes simply are cleaned with water or do massage is a farce. Even injections of atropine, a remedy, in the heart would be effective only immediately. And only the general incompetence of journalists does not allow them to see the ridiculousness of their media propaganda.

SARIN GAS: TECHNICAL AND GOOD QUESTIONS THAT DO NOT RAISE THE NATO MEDIA

Why is it impossible that Damascus had used sarin gas in the rif of Damascus?

Damascus has just been accused with the use of chemical weapons by its opponents. But is this accusation plausible? Militarily no!

According to Arab TV al Alam, which is very interested in this accusation, « the new campaign of intoxication is due to meteoric success of the Syrian army in the suburbs of Damascus in recent weeks where terrorists are in a large confusion and are eliminated in dozens or even hundreds. This new and great victory of the Syrian army has plunged the Arab-Western camp in the largest uncertainties.  »

But the real issues are neither military nor psychological but simply technical. What would it take for such an attack to be technically possible:

1 / sarin gas as any chemical or microbiological substance could not be used in residential areas because the wind is spreading these substances too quickly and contaminates the environment in a large area of ​​10 kilometers. The area where the opponents accuse Assad’s forces to have used sarin, namely Al Moazamiya is located 5 kilometers from residential areas and the military base Al Mezah. Is it conceivable that the Syrian army uses this substance against itself?

2 / the area exposed to chemical gas is inaccessible for 36 hours from the time when the attack is launched. Anyone wishing to get there should be wearing a special suit. The question therefore is this: how is it that the media of NATO and its Arab accomplices were able to shoot reports on the alleged scene of the crime?

3 / the Commission of Inquiry of the UN is in Syria at the demand of Damascus. Is it reasonable that Damascus uses chemical weapons against its opponents at a time when the UN investigators are on hand to discuss the use of chemicals in Khan Assal?

SCENARIO ALREADY PLAYED IN MAY 2013 …

Note that these questions also arose about similar reports of LE MONDE (Paris) and Le Temps (Geneva) in May 2013 – already located very strangely also in Djobar on the Rif of Damascus – and photographs of « testimony » (sic) – obviously staged – presented can in no case correspond to attacks with Sarin. Starting with jihadist fighting under the gas, some without a mask. Or ridicule « testimony » of journalists who « survived » to these attacks with just irritated eyes (which seems to correlate with tear gas, such as those used in … Paris against the spring protests).

These are the same journalists – investigators, prosecutors and experts at the same time – that brought to France the « samples » collected out of any scientific endeavor. Which were then « tested » in the laboratories of the French Army – itself party to the conflict against Damascus via its special forces and special services – … all for Fabius to present his « evidence » (resic).

Moscow’s position citing « a missile containing a toxic chemical made by rebels in the Damascus suburb » corresponds on the other hand to the described situation. And is more credible than this « sarin gas » evoked to justify Western accusations about the « use of weapons of mass destruction by Damascus. » Hackneyed scenario and already used to justify the aggression against Baghdad in 2003 …

Illustration: Example of « reports » of LE MONDE on the « chemical warfare in Djobar » (May 2013) and AFP graphics

11 Responses to # SYRIA COMMITTEES / CHEMICAL WEAPONS IN SYRIA: AN ANTI-ASSAD PROVOCATION OF THE FSA MADE IN NATO!