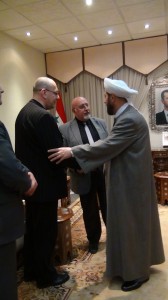 Luc MICHEL, leader and founder of SYRIA COMMITTEES/COMITES SYRIE, returned this June 15, 2013 from a one-week trip to Damascus, via Beirut.

Mission organized by the Geopolitical Analysis Centre ECGA (Brussels-Warsaw-Berlin), at the invitation of the Syrian Government and Parliament.

Luc MICHEL, accompanied by a video team of PCN-TV, represented there the SYRIA COMMITTEES.

The Mission (*) was joined for 48 hours by a delegation of the Vlaams Parlement (Flemish Parliament, Belgium), represented by its vice-president and president of its Foreign Affairs Committee (Commissie voor Buitenlands Beleid, Europese Aangelegenheden in International Samenwerking) come to broach the topic of Belgian jihadists and the EU.

MEETINGS WITH THE GOVERNMENT, PARLIAMENT, THE PARTIES AND RELIGIOUS AUTHORITIES OF THE REPUBLIC

Exchanges also took place with representatives of nine Syrian parties (Nasserist, socialists, communists, nationalists …) represented in Parliament, as well the Presidential Majority (BASP and Progressive National Front) as the Arab and Kurd Patriotic Opposition (which seats in the Government of National Union since the crisis), at a round table in Parliament.

Meetings with many journalists have been held.

Luc MICHEL also felt the pulse of the Syrian Army, met with officers of the security services, members of the People’s Committees (civilian militia of districts).

MEETING WITH JIHADISTS FROM EU

The issue of jihadists who came to import terrorism with the help of NATO and some EU countries was discussed at length.

For the first time EU nationals jihadists who are detained in large numbers in prisons and will be tried for terrorism (based on international law), were presented to the Mission. Luc MICHEL (visiting and helping prisoners in Belgium for years) could directly question and film some of them, visit their prisons (and find that their conditions of detention are to EU standards).

Photo Album on the Facebook PAGE of the SYRIA COMMITTEES:

(*) Another « Fact Finding » Mission, including British and Italian MPs, was also present in Damascus from 11 to 13, unrelated to ours. This is in response to amalgam of the British press … 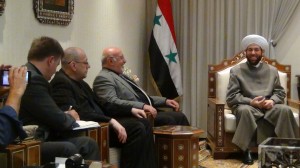