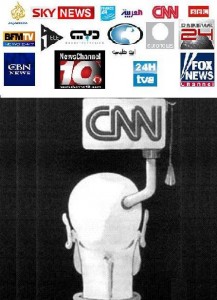 No, president Assasd does « not negotiate his departure » …

Damascus denies the words attributed by Radio France International to a Russian diplomat on a « departure of Assad. » « The words of the Ambassador would have been distorted »!

The French TVs have now become the running dogs of imperialism. Ethics in the French media (and others) is sold in roll and is used in WC …

The trick of « negotiated departure » had been invented for Gaddafi in Libya in March 2011. The Briton Cameron even inventing a  » Gaddafi flying to Caracas », once again on social networks and media of NATO. The result was to launch chaos in Tripoli. At the same time, very timely, when jihadists supervised by Qatari and French special forces (where are enlisted the French of North African origin) launched an insurgent assault in several neighborhoods in Tripoli.  Followed by several hours of bloody fighting in the heart of the Libyan capital …

Obviously, the NATO presstitutes replay the scenario against Ba’athist Syria.

« The interview conducted by Radio France International in Paris with Alexander Orlov was recorded and posted on websites. (The words) were deformed and the Russian ambassador did not say what it has been awarded » adds television, lambasting the « bloodthirsty media ».

Interviewed by Radio France International (RFI) in Paris on the inevitability of departure from power of the Syrian president, the Russian diplomat, whose interview was put together, seems to respond : “Personally, I agree with you. I think it will be difficult for him to stay after all that happened”. On June 30, the final statement of the meeting of the Task Force on Syria in Geneva « provided for a transition to a more democratic regime » – which does not involve any departure of the Syrian president, supported by a large majority of his people – and « the final statement was accepted by Assad, » said Mr. Orlov. « Assad has appointed his representative for negotiations with the opposition on this transition. That is to say, he agrees to go. But in a civilized manner », they make Mr. Orlov say.

Russia, traditional ally of Syria, has always said that so far the fate of Bashar al-Assad could only be decided by the Syrian people without foreign interference, unlike Westerners who call for his departure. On Thursday, Moscow and Beijing vetoed attempts by the UN to pressure the Syrian regime for the third time since the conflict began in Syria 16 months ago with a revolt that has militarized itself over the months against the brutal repression by the regime.

This blockage has triggered sharp criticism from the United States and European countries who had proposed this text. Mr. Orlov said « there can only be a political solution to this conflict » in Syria and that « we must find the path of negotiations. »

Read also (only in French): 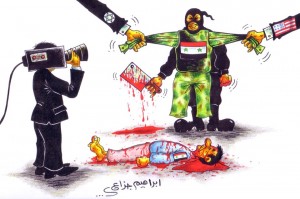 13 Responses to # SYRIA COMMITTEES / MEDIA LIES AND MANIPULATIONS OF NATO PRESSTITUTES TO CREATE CHAOS IN SYRIA!