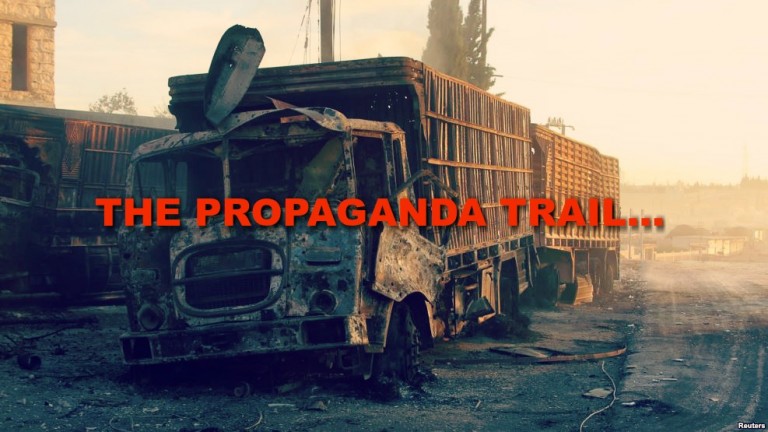 Saturday 17 September saw one of the most shocking and incendiary international incidents of this NATO war against Syria – a US-led, one hour-long airstrike which massacred more than 60 Syrian Army soldiers and wounded at least 100 others near the city of Deir al-Zour. The US claimed they were targeting ISIS. However, the US brutal attack on the Syrian Army provided cover for an ISIS advance into Syrian Army held territory.

… JUST 48 HOURS LATER, NEW REPORTS THEN BEGAN TO CIRCULATE THROUGH THE WESTERN MEDIA ABOUT AN ATTACK ON A UN-SPONSORED AID CONVOY

Just 48 hours later, new reports then began to circulate through the western media about an attack on a UN-sponsored Aid Convoy. It is alleged that 18 of the 31 reported trucks were bringing “food relief ” from UN stores, said to be managed by Syrian Arab Red Crescent (SARC),to the town of Urm al-Kubra, west of Aleppo. This is an area controlled by one terrorist group, US backed Nour al-din al-Zenki and surrounded by US/NATO supported Al Nusra Front (al Qaeda in Syria)…

The UN and international groups were immediately up in arms: “Yesterday’s attack is a flagrant violation of international humanitarian law and it is unacceptable,” Peter Maurer, president of the International Committee of the Red Cross (ICRC) said in a statement. The only problem is: the NATO backed terrorists occupying areas (such as this area in East Aleppo have never recognized international humanitarian law. That lawlessness applies universally across the spectrum of terrorist entities, including Nusra Front, ISIS and the myriad of US/NATO funded and armed terrorist brigades without exception.

Naturally, the US immediately labeled the attack, “a bombing” and proceeded to accuse both Russia and Syria’s Airforce. The US claimed it had reached a “preliminary conclusion” that indicates two Russian Su-24 jets were responsible, although unnamed ‘intelligence sources‘ have told media operative Barbara Star from CNN and other media outlets, that their intelligence “is classified and so they can’t actually show it to anyone” …

WOULD COUNTRIES LIKE THE US AND UK LIE AND FABRICATE INTELLIGENCE OR EVIDENCE , IN ORDER TO ACCELERATE A CASE FOR ESCALATING MILITARY INTERVENTION?

Q: would countries like the US and UK lie and fabricate intelligence or evidence , in order to accelerate a case for escalating military intervention? The answer is a resounding ‘yes’. They’ve done it before, and they most certainly will go with what works in terms of advancing their geopolitical agenda. In the words of Donald Rumsfeld, this is one of those “known knowns.”

A website called BELLINGCAT, run by Eliot Higgins, immediate produced ‘a report’ entitled, “Confirmed : Russian Bomb Remains Recovered from Syrian Red Crescent Aid Convoy Attack”. This was meant to implicate Russia in the said airstrike, or “bombing” incident. ‘Bellingcat’ claims to be an independent ‘open source‘ intelligence website run “by and for citizen investigative journalists“, but in reality, it exists in order to support the narratives that serve NATO, and more specifically – the British Foreign Office or the US State Dept narratives. Producing flimsy and unsubstantiated evidence to support accusations against Russia, especially with regards to the Ukraine and the MH17 event, and now with Syria – seems to be Belingcat’s primary function. One clear indicator that Bellingcat is probably working on behalf of the British Foreign Office is that Eliot Higgins has a direct line of communication with the Foreign Office construct, embedded exclusively in and alongside Nusra Front & ISIS terrorist forces in Syria, none other than the ‘White Helmets’. This connection was openly admitted by Bellingcat: “Since the post was published the Bellingcat team has been in touch with the Syrian Civil Defence unit closest to the attacked site, who recovered and photographed two pieces of debris, including the object featured above.”

It’s worth noting here that the ‘White Helmets’ plagiarized the “Syria Civil Defence” name, after stealing ambulances and fire engines, kidnapping and even murdering real rescue volunteer workers, according to members of the REAL Syria Civil Defense shortly after this western creation was launched in 2013 by high ranking British and NATO military intelligence operative James Le Mesurier: “They came in and they drove us out of our homes and they came to the Syria Civil Defence yard and they killed some of my comrades, they kidnapped others. They wanted to force me to work with them. I escaped at night. I was forced to leave my teenage sons behind. They burned my house to the ground and they put my name on all the terrorist checkpoints so if I go back, they will kill me.” ~ ‘Khaled’ (REAL Syria Civil Defense survivor, recounting 2012 terrorist takeover, Aleppo).

Note also that the ‘White Helmets’ are drawing finance of at least $60 million primarily from NATO members states, including at $23 million from US AID (US State Dept), $25 million (£19.7 million) from British Foreign Office, $4.5 million (€4 million) Netherlands, and other funding directly from the EU supposedly for ‘assistance and training,’. Initial investigations into the extent of the EU funding and equipping of this deceitfully self-proclaimed “independent first-responder” is still ongoing but has already demonstrated that the EU is also heavily invested in this fifth column, terrorist support ‘NGO. ’It was announced, just today, that the German Foreign Office is officially funding the White Helmets with $7.86 million (7 million Euros).

Also, the recent awarding of the “Alternative Nobel Peace Prize” to the White Helmets seems to be another conveniently-timed PR device designed to further legitimize additional public funding for what can rightly be described as a terrorist-linked criminal entity. This funding is concealed behind the generic heading of “Emergency Health and Relief Support to the Population Affected by the Crisis in Syria”, through the Directorate-General for European Civil Protection and Humanitarian Aid Operations (DG-ECHO), formerly known as the European Community Humanitarian Aid Office.

“PROOF” OF A RUSSIAN BOMB LANDING???

This latest media stunt essentially amounts to heavily politicized ‘gotcha’ blogging by Bellingcat. In this instance it appears that Bellingcat is attempting to amplify a fraudulent, and poorly staged “Russian bombing” of a “UN supply warehouse” supposedly run by the Syrian Arab Red Crescent in the ‘rebel’ terrorist-held town of Urm al-Kubra. Here, Bellingcat’s director, Higgins posts a colourful array of images, diagrams and “proof” of a Russian bomb landing. The only problem with Higgins’ elaborate “open source” trove is that he is much more likely to be analysing a staged photo-op, a set-dressing job courtesy of the White Helmets media team. Put simply, the narrative that’s been contrived by Belingcat and the White Helmets is an impossibility, based on image scenes provided by the White Helmets.

According to independent analyst, Petri Krohn:
“This really looks like something considerably smaller, mortar shell sized, did explode there, and this fin is thrown into the crater, and all converted into this photo-op scene.” “I don’t think anything exploded here, just hit the ground with force to make that crater, or it was already there. The shredding of the boxes to me suggests shrapnel, small, anti-personnel fletchettes.”

Krohn outlines a more likely sequence of events, and suggests the following possible scenario:
“Three things happened:
1) In August or July a small rocket or bomb came through the roof and left the burn marks seen on the walls.
2) On September 19 boxes of medical aid from the SARC convoy were placed next to the old crater, right under the hole in the roof. A small hand explosive was detonated in the old crater.
3) A OFAB-250 tail section was placed in the crater by White Helmets and partly covered with some boxes.

“Bellingcat obtained its photos directly from the White Helmets that show that the object is not a dud OFAB-250, as previously assumed, but a crushed OFAB-250 tail section from a bomb that exploded somewhere else.”

The idea of the damage having been done prior to the alleged Russian/Syrian airstrike is more than plausible, as Urm al Kubra is a Nour al Din Zenki held area, an island in amongst Nusra Front held areas. 21WIRE has also learned that heavy inter-gang warfare had been going on since the 17th of September according to multiple sources on the ground in Syria. The following facts also further demonstrates the invalidity of the White Helmet reports. Indeed, how could the “witness” know for certain that it was Russian and Syrian planes, at night and in the dark, and in the midst of a supposed strike? Equally, why cant we hear and jets and helicopters?

The ground conflict in Syria is being perpetuated by western terrorist brigades under a variety of names , but perhaps the greatest damage to Syria and the Syrian people has been inflicted upon them by the propaganda merchants, a compliant western media, ‘humanitarian’ NGOs, US/NATO think-tanks, and all manner of NATO-biased, ‘Leftist’ peace activists or anti-war protesters in the west calling for another ‘war to end a war’ – when this present war was started by their own governments who are still determined to escalate this war against Syria to effect their “regime change” policy targets.

This latest media incident once more demonstrates the size and power of the apparatus driving this propaganda – with a full compliment of ancillary crisis actors and extras.
From the reactions of Kerry and the West, it is hard not to conclude that we are being propelled closer to the abyss of a dangerous geopolitical standoff, or a World War.

This entry was posted in # ACTU / BREAKING NEWS and tagged Syria Committees. Bookmark the permalink.