# SYRIA COMMITTEES / ‘THE ROADS OF DAMASCUS’: HOW THE ELYSEE MANIPULATED CHEMICAL WEAPONS REPORTS 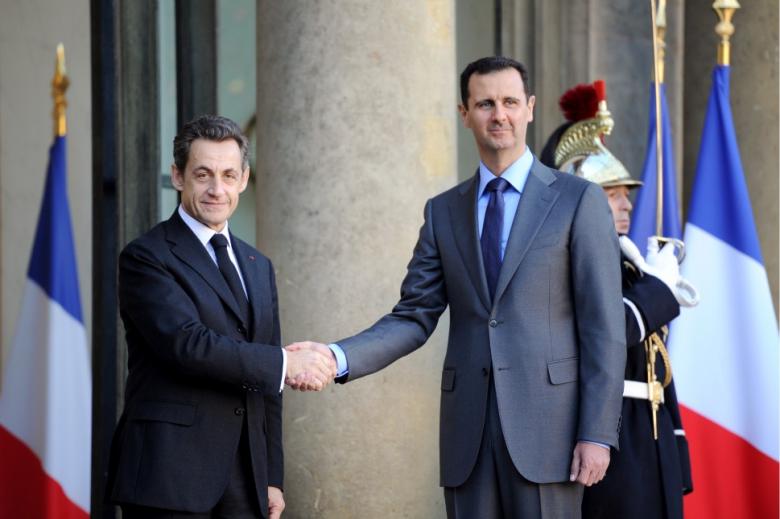 Scandals mentioned in the French book LES CHEMINS DE DAMAS (The Roads of Damascus) published a few days ago have begun to unfold, revealing secret events and details about how the French presidency forced the French diplomatic corps and intelligence services to comply with the politically motivated decision to remove Assad, manipulating reports about chemical weapons and the actual strength of the Syrian regime.

A book published in Paris in october, entitled LES CHEMINS DE DAMAS, LE DOSSIER NOIR DE LA RELATION FRANCO-SYRIENNE (The Roads of Damascus, the black dossier of Franco-Syrian relations) by French journalists Georges Malbrunot and Christian Chesnot, has revealed a treasure trove of information regarding the secret background of the relationship between Paris and Damascus for the past 40 years. The investigative book contains information and interviews with figures closely involved in the Syrian dossier, from the 1980s to the present day.

A “QUASI-SCHIZOPHRENIC” RELATION BETWEEN PARIS AND DAMASCUS

From presidential summits, to political and bloody confrontations, and diplomatic tensions as well as honeymoon periods and secret security coordination between the two capitals, the book tackles the “black files” and other covert events that characterized the relationship described as “quasi-schizophrenic” between the two countries.

According to a synopsis offered by the book’s publisher Robert Laffont, The Roads of Damascus shows how successive French presidents dealt with Syria, “often emotionally, precipitately, or with improvisation, which led to the impasse that we now observe (in the relations) today.”

The authors recount an incident immediately following the assassination of former Prime Minister Rafik Hariri, saying, “At the very moment Jacques Chirac, after the assassination of his friend Rafik Hariri, wanted to ‘disgorge’ Bashar al-Assad, France delivered to Assad in utmost secrecy two Dauphin helicopters and provided his entourage with a system for secure communications.”

For their part, presidents Nicolas Sarkozy and Francois Hollande “in turn committed the same mistakes by ignoring the ability of the Syrian regime to survive,” the two authors conclude.

The French press has published some excerpts from the book, including in Le Point on October 9. The magazine said the book was “exceptional,” and published parts from the book containing important details about the Syrian crisis as they were discussed in the corridors of the Foreign Ministry and the Elysee, and the French intelligence and security services.

A BRAWL AT THE FOREIGN MINISTRY

A section titled “A Brawl at the Quay d’Orsay” in the book recounts a violent quarrel that took place over Syria at one of the offices of the Foreign Ministry in Paris in Spring 2011. At the time, Alain Juppe was the foreign minister of France.

The brawl took place at the office of the Chief of Staff to the Minister for Foreign Affairs Herve Ladsous, between the French Ambassador to Damascus Eric Chevallier and Advisor to the President (Nicolas Sarkozy at the time) for Middle Eastern Affairs Nicolas Galey. Also present were the then-Director of the Middle East and North Africa Department and current French ambassador to Lebanon Patrice Paoli, and Director of the Prospective of the Ministry Joseph Maila, in addition to diplomats assigned to the Syrian issue.

“The Assad regime will not fall and Assad is strong” and will stay in office, was the conviction of Ambassador Chevallier at the time. This is what he had written in his diplomatic dispatches from Damascus, for which he was summoned back to Paris. Chevallier reiterated to those present at the meeting that he was “close to the field,” and had “visited various regions in Syria but did not feel that the existing regime is crumbling.”

“Stop talking nonsense!” Galey, Sarkozy’s envoy, interrupted. “We should not stick to the facts, but must look farther than our noses,” he added. Galey’s interjection was “unprecedentedly hostile,” according to one of those who were present. Even Ladsous “was shocked by Galey’s forcefulness,” as it turned out that Galey “had not come to the meeting to take part in the deliberations, but to fulfill a specific mission: to impose the view that says Assad’s fall is inevitable,” and make everyone understand that any dissenting opinion in this regard would not be tolerated in the French diplomatic corps.

One diplomat who was in contact with the two agencies explained that both were convinced that Assad would not fall quickly, but that internal intelligence noticed rapidly the role of salafis and jihadis in the rebellion, while the foreign intelligence continued to send reports demonizing the Assad regime.

But Chevallier defended his position, which was at odds with what the Elysee wanted to force through. He said that he had met with the Syrian opposition repeatedly, “but still felt that the regime has what it takes to survive as well as dependable foreign support.” “We do not care about your information,” Galey retorted again, prompting the ambassador to respond, “You want me to write something different, but my job as ambassador is to continue saying what I have written, that is, what has actually happened.” “Your information does not interest us. Bashar al-Assad must fall and he will fall,” Galey added in a sharp tone. The quarrel then grew sharper forcing Ladsous to intervene several times to end the “verbal battle.”

A STRANGE REPORT ON CHEMICAL WEAPONS ATTACKS IN SYRIA

Another section of the book dealt with the actions of President Francois Hollande in August 2013, when he ordered the declassification of the summary of external security and military intelligence reports on the chemical weapons attacks in the Ghouta region near Damascus, at a time when he was mobilizing international support for a military strike to punish those “who poisoned innocents.” The book reveals that the conclusion of the joint report underwent some “trimming” by the Special Adviser to the Minister of Defense Jean-Yves Le Drian, in a way that harmed informants.

The informants had raised some question marks in their reports regarding events they could not verify, such as the use of sarin gas. One of the assumptions made ​​by informants in their reports held that “it is possible gas had leaked following classical bombardment by the Syrian army that hit a secret rebel laboratory.” But this conclusion was “simply and completely redacted” from the final text of the report.

FRANCE MADE MISTAKE WITH THE RUSSIANS

Former French Interior Minister and Secretary of the Presidency under Sarkozy Claude Gueant says that the way Juppe had dealt with Russia was a grave mistake, stressing that Russia should not have been marginalized, but rather benefited from. He added, “If we had set aside selfishness, prestige, and fondness of power, and told the Russians you were the most capable party to help find a solution in Syria, they would have welcomed it and participated positively. They alone were able to do something.”

The reports coming from the two sides appeared contradictory in 2011. One diplomat who was in contact with the two agencies explained that both were convinced that Assad would not fall quickly, but that internal intelligence noticed rapidly the role of salafis and jihadis in the rebellion, while the foreign intelligence continued to send reports demonizing the Assad regime.